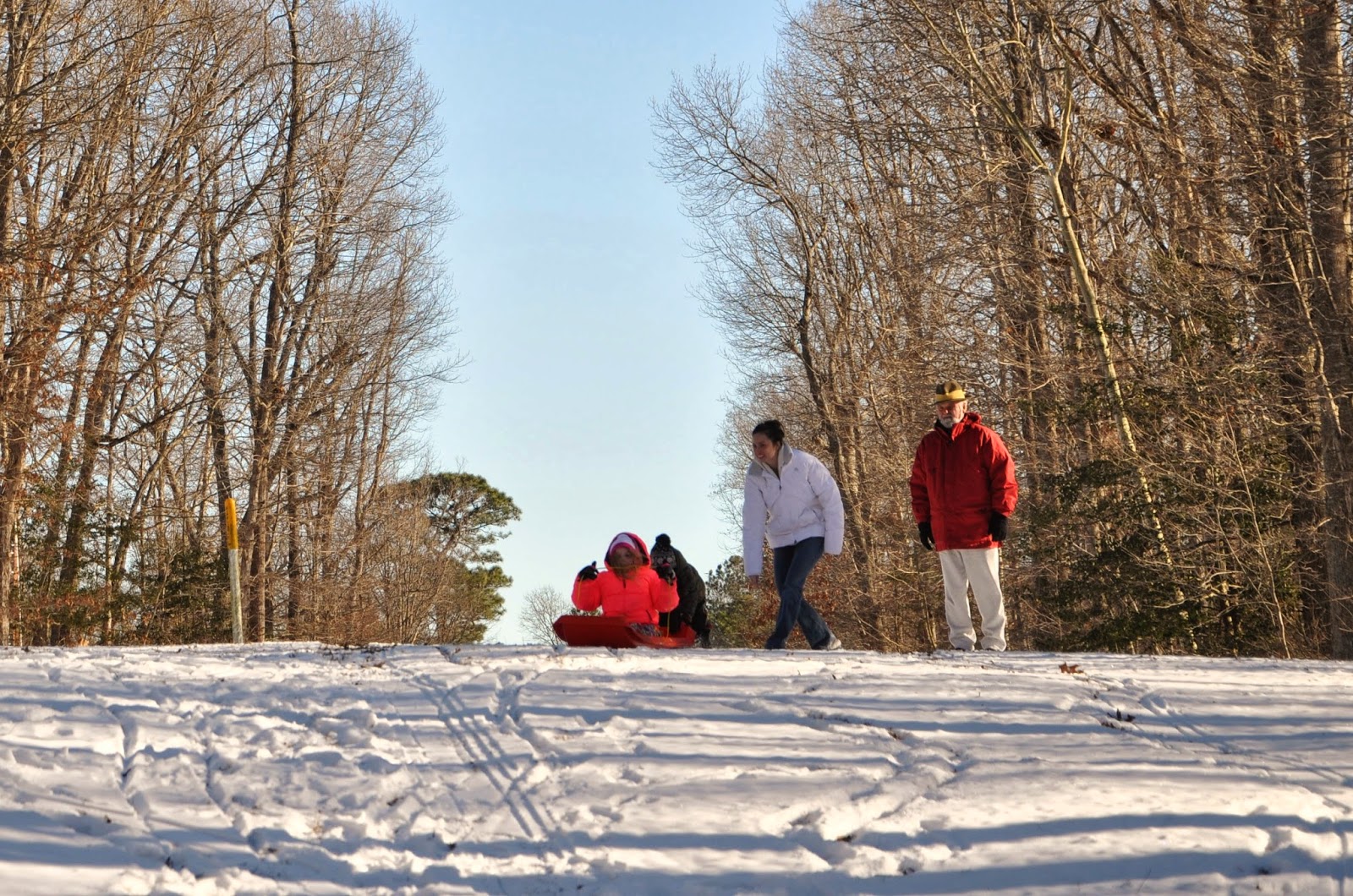 We finally got our first real snow for 2014. Although my arthritis doesn't allow me to romp and jump around in it, I am thankful we were blessed with enough for my humans to play in. In the picture above Dad is supervising my human sister as she pushes her son, Elijah and niece, Savannah. Dad says those are his grand-blessings and it's his job to protect them. I am pretty sure my sister can handle it. I think Dad forgets sometimes that she's a grown up.

Little Eli had never been on a sled before and I'm happy to say, "he loved it!" Mom and I have convinced both Savannah and Elijah to love the snow. Now, we just have to work on the new little human God just gave us. Her name is Charley, but she's way to little to come out and play this year.

As little humans go, she's cute and absolutely gorgeous, but she has this issue that seems to run in our family. You see, when we get babies they have this ugly disease called "Colic" and they scream a lot. Mom told me it's because their tummies hurt real bad. Looks like to me some human would have found a way to fix that disease by now, but what do I know. I'm just a dog.

I understand the bitter cold is everywhere and some humans must get out and drive in it. If you are one of those humans, be safe! I am genuinely concerned, but I also don't want to lose any readers. Not just everybody reads and understands dog/malamute!

Woofs and Wags,
Sitka
Posted by Andrea at 7:50 PM

Growing up in NJ, mom misses those snow days
Lily

The Ladies of Beaglebratz Manor said...

Hi Sitka - Shiloh'n Diva Shasta here - FINALLY! Yep - we know how dif'rent kinds of issues can really cause problems fer our moms - that's y we didn't git here sooner. We gots a new little hoo-min kiddo too - well, the baby is our mom's nephew's baby girl. We just seen pikchures tho cuz little Emily lives way over in Australia. We hazn't talked 'bouts her on our blog yet - may-b we will do that altho who knows when we can git our mom tue help us blog sum more.
We gotta go fer now - when mom isn't home we hazta uze our telepathic wavestream ability and it is almost gone fer now - c ya later...
Shiloh'n Diva Shasta