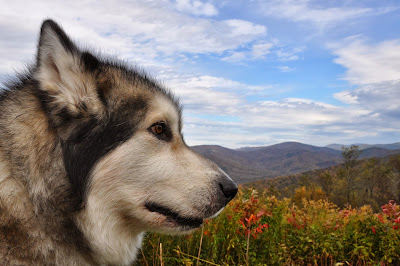 Yesterday, Mom and Dad took Trouble and I to the mountains for the day. It's the first time I've been able to travel since I became ill in late August. I am still unable to hike, but I was able to get out, walk around, and enjoy the cooler temperatures. Mom took the above picture of me looking over one of the over looks on Skyline Drive in Shenandoah National Park.

Mom and Dad have always been extremely protective of Trouble and I. They hardly let us out of their sight. Recently, I have been hearing the term "helicopter parents." I thought it only applied to humans until yesterday. People think my Mom is the one who is overly protective, but they have "no" idea what lengths Dad will go to.

Dad decided to have an early human dinner and Mom agreed. Dad rode around in circles until he found the perfect parking place where he could see the car through the restaurant window at Big Meadows Wayside Cafe. I liked the spot he chose because it meant I could keep an eye on my humans and also watch all the people coming and going. However, it was a little embarrassing when I realized Dad was using binoculars to watch every move I made from the dinner table inside. Good grief, now the whole world knows I too have a helicopter parent! Come on, Dad, I'm 8 years old. I'm not a little pup anymore.

So, what's a wise old dog like me to do. I have to get through to him or at least teach him a lesson. While he turned to eat his dinner, I carefully removed the head rest and lifted the rolling cooler over the seat into the back with me. I didn't open it. I thought that might be pushing it. I just wanted to remind Dad who is really in charge around here. He's still trying to figure out how I did all that and he never saw a thing. He is even more baffled because I left no marks or evidence on the seat, cooler, or headliner in Mom's car.

Hey, I can’t find an email address here. Would it be possible for you to email me back so I can ask you a question?
–Shaye
shayewalsh1@gmail.com

Hi there, What wonderful pawrents you have that take you on adventures. I love how protective they are-I'm like that with Hunter, he's been attacked several times and is pretty small. I always worry when I see big dogs venturing near if it doesn't look like the owners have control of them. I also want to add, on your side bar, there is a picture of your mom on some steps with you but also with a couple of small dogs-are they yours or other families? One looked like a poodle or Bichon?
Give your mom a big hug for me.
Wags, Noreen & Hunter

I think I know the picture you are talking about. At one point, mom and dad had four fur babies. Me/Alaskan Malamute, Nanqua/Samoyed (now in heaven), Macy/Cocker Spaniel (also in heaven), and Trouble/toy poodle! Mom taught me to lay down and be gentle with small dogs.

The Ladies of Beaglebratz Manor said...

Shiloh'n Diva Shasta here - u know, in a way we due agree with u - sumtimez our mom can b a little over-protective when it comez tue what we eat. However, u gotta r'member - there r thoze poor unfortunate doggiez who due not git much attenchun at all frum their so-called pawrentz. We wood rather our mom b a little tue over-protective an'that way we know just how much our mom really duz care 'bout us.
Shiloh'n Diva Shasta