Mr. Bat and The Maxhounds 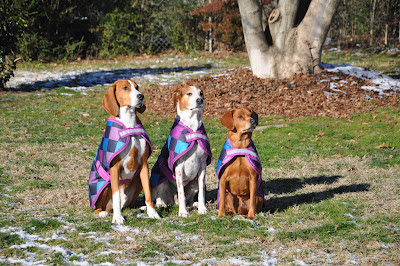 These three handsome men are my hound buddies, Hank, Kramer, and Alvin (left to right). Last week there mom, Jane called my mom screaming and laughing all at the same time.

Finally, mom understood the drama unfolding in the "Maxhound" household! A little bat found its way inside Ms. Jane's beautiful home. She and my three handsome hound buddies were quietly watching TV when all of a sudden Mr. Bat revealed himself. He began nose diving toward Hank, Kramer, and Alvin.

Hank, Kramer, and Alvin began jumping, leaping, and bouncing off the walls and furniture. There once dignified and well mannered bodies flew out of control. Ms. Jane became hysterical with laughter. She eventually got herself under control and wrangled all the hounds, placing them on the porch.

Ms. Jane captured the little bat without harming him and placed him in the "front" yard so he could fly away on his own. Don't worry. She didn't touch him with her bare hands. She used a shoe box and cardboard to remove him.

Nanuq, Trouble, and I were a little jealous. We love "excitement!" Mom and Dad were quite happy the excitement was at Ms. Jane's.

Woofs and Wags,
Sitka
Posted by Andrea at 10:39 AM

We had a bat in our house just last week...second time in less than a year!! I let Dad and my human brothers worry about getting them out. I go hide with Mom in her bedroom (with the door tightly shut)!

Hi Sitka, Wow what excitement for your friends but I agree with your mom and dad. Did you know that the goop they drop is very dangerous for you pups. We once had bats in a cabin and they would dive bomb us all night, that is when I started not liking them. Glad your friends mom caught it.
Hugs, Noreen & Hunter

They are really handsome on their post! I'm glad that everyone is doing great with their human friend:D

Woo Hoo, your friends really had a big dose of excitement Sitka. Your friends are very handsome, but no one can hold a candle to you in my eyes, love you.