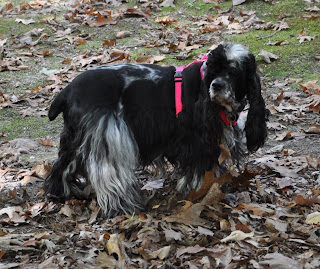 Macy is an elderly, deaf, Cocker Spaniel. She will be 16 years old January 7th, 2010. Macy has been a part of mom's life since she was 2 years old. Mom purchased her from a breeder who had used her for breeding. Mom deemed that as a rescue.

When Mom divorced her first husband, he took Macy and refused to allow her to have him. About 4 years later, Mom found out Macy was emaciated and chained to a tree with no shelter. Mom was livid. She prayed and tried to be polite, however it is hard to be polite with some people.

Upon request, their answer was no. Mom prayed. She was so upset and concerned, but needed to be sure she handled herself appropriately. Mom sent an email with the stipulations of what would happen if they did not surrender Macy or seek proper medical treatment, etc. As a last resort, Mom let the offender know she would pursue the "thousands" of dollars of past due child support if provisions were not made for Macy to receive the life she deserved. Within 3 days, Mom had her sweet baby girl back in her arms.

Upon receiving Macy back, she met many obstacles. She was severely matted, her mouth oozed with puss, and she had mammary cancer. She only weighed 13 pounds. Within a few months, Macy endured several surgeries and slowly gained weight on her new regimen of holistic dog food and special treats. She is now back to her normal cocker weight (32 pounds). Now, Mom has her on a diet. It is hard for us to put Macy on a diet, because she acts as though she is starved all the time. We all feel sorry for her, but we do not want her to be over weight, either.

I wanted to tell Macy's story, because since coming back to live with us she has also endured surgery for peripheral nerve cancer. She is beginning to stumble a little and act her age. We all know she is getting up there in age, but Macy doesn't like for us to call her old. She has been back with Mom for 3 years, now. We pray she will have many more years with us.

Macy rarely participates in Dog Therapy. Mom says she has earned the privilege of sleeping and lounging around all day. She loves everyone and would have been an awesome therapy dog. She is a real sweetheart!

Thats to bad that she had to go through all that. But it is good that she is with you, had the surgeries and back to herself again and hopefully for many more years!

Oh my, what a story! I am always blessed when I hear of animals being rescued and brought back to health. Yet, I am always so very saddened to hear the reasons why they were even needing to be rescued.

Glad Macy is with the Perdue Zoo!

Bless you for not giving up! People like your ex should go to jail for animal abuse. I hope she has many more years to share with you.

Jane In The Jungle said...

This just brings tears to my eyes! We have a 13yr old Dach/Ter mix we resuced form the pound....he's deaf now...he had been a street dog his early yrs. It's taken lots of patience and love to get him to be comfortable with all people!
Praises!

Bless your Mother for being persistent ... how blessed you all are to have her safe & sound back with you.

She is beautiful Sitka and I'm glad that sister Andrea rescued her. Thank you for sharing with us this great story. God bless all of you.

so glad Macy is with you!

Sika, thanks for sharing Macy's story with us. One more example of the immense you love has for all living beings (and I think a special extra dose for her furry, four-legged children:-)

ANDREA! I love this post! My "momma rage" kicked in too when I read about Macy's predicament! But God showed up!

I am glad she is her healthy self (although the other issues are difficult) again.

God has helped me more times than I can count through the love of my dog(s) ---referring to the ones we had when I was young.

These days, Scooter, our 6 month old Shih Tzu is my constant companion, always on my heels when I am at home. He loves me and I love him.

God has blessed me tremendously.

We had a yellow Lab that I bought as a puppy in March of this year, but soon grew to realize that this loveable dog was not the one God intended for us. I bought him w/o asking God. He was obedient to me, slept in our laundry room and had the run of the small fenced in back yard of a day, I soon realized he needed more. He was a lab after all.

God crossed my life with a dear friend who had 2 other Labs (along with a small rescued poodle) and Max soon joined their home. They have 2 kids who adore him and a big fish pond (Max loves to fish), a fenced in acre to run (I had a tiny yard) and the attention of the whole family and not just one member :). I cried the day he went to live with them, but they promised I could see him anytime and would even give him back if I needed him. (they live within 15 miles of me) Of course I wanted him...but knew that he needed to be in a free/open/doggie environment and not cooped up the way he was with us. It was hard. Even now, if I read a story about a dog that has to be given away or his owner dies...I cry.

We have the one house pooch, and honestly, I have thought of getting another Shih Tzu, but with the cost of them --for now, Scooter will have to make do with me (mama) and Jeff (daddy) as his playmates :) We'll wait and see if God brings one into our lives.

What an inspiring story about how your Mom fought for Macy. I pray that she will be around a long time, with good qualty of life.

What a sweet sister...you have a great family, Sitka!

I'm so glad you rescued that poor dog. It makes me very angry when people have animals and mistreat them. Grrrr!

I love the way you handled the situation.

I am late to this post due to internet problems which I have just resolved. I am so thankful you got Macy back. There are people who should never have dogs!! I know dog owners who have rescued dogs from situations similar to Macy's and quite frankly, I would do the same if it would help a dog.

PS Andrea I cannot ever access Arise 2 Write. I think there are so many add ons that my little laptop cannot handle it. So, I continue to avidly follow Sitka's blog. xoxoxo

Sweet Macy dear, from one chronically ill creature to another, my heart goes straight out to. I'm truly sorry to hear of the atrocities you've had to endure over the years, but am thankful that at long last you were able to be reunited with your loving, wonderful mother.

Well, we knew we were lucky because even though we were not really wanted, our Mom's owner took care to find us all good homes. Unfortunately due to owner's carelessness our three brothers have since died. We, however are in earthly Dog-heaven and loving it! We keep our owners in order and make sure they get some excercise and fresh air every day. Please give Macy our regards and tell her that lounging around is a perfectly respectable occupation!
Wags and slobbers,
Ben and Bertie Dogs.