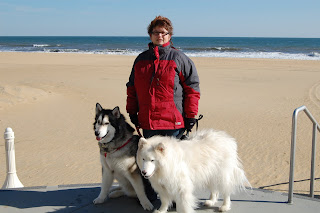 Last night was an amazing night. We (Nanuq and I) went to CSH, Petersburg, Virginia. We entered and rode the locked elevator to the second floor. Then we went through a few more locked doors to get to our destination. There is a large activities room we are allowed to use so the patients can visit with us.

On many visits, we have observed a gentleman who always carries a stack of papers with him. He keeps his head lowered, never making contact with anyone. Once or twice, I have pulled toward him and he has given me a little smile. He must deem his papers very important, because he "never" puts them down.

Last night, he came and stood in front of me (sitka). Mom said, "you can pet him if you would like." He grinned, leaned down and petted me. The humans watched with amazement as he talked to me and interacted with me and then with Nanuq later on during our visit. He has been in the psychiatric for a "long" time and noone had ever heard him speak.

The humans were amazed and filled with excitement with this gentleman's progress, but they did not realize GOD had yet another miracle to work.

I can not stay as long as Nanuq, because of my hips and knees. Mom takes me outside after the first hour. One of the staff escorts us back through all the locked doors and into the front courtyard. I rest while we wait on Nanuq and Dad.

After I left, Nanuq continued to visit with the patients. He even played a game of sorts with the man who found his voice. As Nanuq's time came to a close and he was escorted back to the first floor a young woman approached he and Dad. She said, "what breed is he?" Dad answered her and she attentively listened and continued to talk to Dad.

After the patients were taken back to their rooms, one of the staff members told Dad that this patient who had just spoke to him had been in the facility for over 3 years and had never uttered a word that she could remember.

Mom prayed and asked for prayer earlier in the day. She prayed that GOD would use us (her furry kids) in a way like never before. Most certainly, GOD ANSWERED!

Another day in the life of therapy dogs~~~

I am so thankful for Sitka and the gift God has blessed him with.

WOW! I got goose bumps, Andrea (or should I say: Nanuq and Sitka!!), in reading this. God works in such wondrous ways ... beyond what is imaginable. I praise Him for the miracles of two special people who found their voices last night. Praise Him! Thank you for your ministry.
~ linda

So glad I came for a visit to meet Sitka and Nanuq! They are precious and I am such an animal lover! What a wonderful ministry this is! So very rewarding too!

God has blessed you and your husband bc you have such love from the amazing animals AND are allowed to see first hand the miracle that they help bring out!!
How awesome is that!!

Thanks for sharing! I tried to follow this blog 2 times and couldn't get it to come up...:( I will try again another day though!

Hooray God! Thank you for working in such mighty ways!

Regards.
Have a great weekend.

WOW! What a blessing!

Used of God for miracles!

Sitka and Nanuq, I am so blessed by your stories of how God uses you to touch people where most can't reach.

Thank your parents for me. Their passion and obedience spurs me on.

Hey, Andrea! Thank you for visting my blog! Yours is amazing! I want to share it with my boys after school!

Beautiful! God sent you, Sitka, to this man to bring joy and a reason to speak. You are a gift from God, and He has given your life purpose...God bless you and mom and dad!

This just goes to show that God can use all of us to work His will in the lives of the people we touch. Praise God for the service you do for God.

What an incredible evening with Sitka, Nanuq, and "mom" and "dad." God most assuredly did work miracles through you furry children! What a privilege it is for "mom" and "dad" to be able to share in God's work alongside you two magnificent creatures!

I've been debating getting my dog certified as a therapy dog. She is so attune to people's emotions and was "top of her class" in obedience. How hard was the process?
yayaorangenanny@yahoo.com

Love your blog, Sitka! I'm a HUGE dog lover, and a big fan of your particular breed. I also LOVE God and am so thankfully that He chose to use you in such a powerful way. I pray He does many more miracles through you in the days to come.

WOW! Sitka and Nanuq - God's precious creatures being used for His Glory .....what a wonderful testimony of the "greatness" of our God! To Andrea and your husband, I know the Lord will shower His blessings upon you for your commitment to share your canine "babies" to be used for His Glory!

Sitka that is an amazing miracle. You and Nanuq are God's messengers!! Many hugs to you and your Mom and Dad!! xoxoxo

"Another day?" But it was surely extra-ordinary, Sitka! You're a blessing, together with Nanuq and human parents. God had truly used all of you to bring His light into this dark place. God bless all of you.

How awesome that you 'touched' this man so deeply. Very emotional to read ..... TY for sharing. TTFN ~Marydon

Sitka,
I am so happy to see that your journey in life is to make a difference in the lives of humans. What an amazing story!
Cindy

I am so grateful for the ways you, Nanuq (and Doug and Andrea) minister to those in such need.

What a blessing your dogs are and what a blessing that you and your husband can share this precious slice of life. To God be the glory!

This is very awesome! I mean I think it is the most awesome of awesomes!

Thanks for referring us here from Arise to Write!

This is wonderful! God used those dogs and you - their humans in a special way!

So wonderful! Dogs are great, God is the Greatest!

What a wonderful story! God knew you were in need of a special blessing like this. This only fuels my desire to do this some day. You and your husband are very special people and are a blessing to not only those you visit with your dogs but I am sure to all those around you.
(((HUGS))) to your whole pack!
Chester & Mom ;0=)

How cool that Sitka has her own blog! I have never read a story through a dog's perspective before, it helped me to realize how much God loves all His creation.

My pleasure, thanks for stopping by and visiting our blog.

It is amazing work that you and your "furry children" do. It gives me such warmth to know that there are people and animals out there performing such incredible deeds. Thank you from the very bottom of my heart for all that you do.

Beautiful dogs! I am always amazed at how they can open up people in ways another human cannot.

Sitka, you are one amazing dog. And you are beautiful, too. How special you must have felt when that poor man related to you. Keep up the good work.

Sitka, I fully believe this miracle and I bet there are many more that happened that night that we don't even know about. You rock, Sitka.

This is absolutely precious. :)

As someone whose pet cat, Stella, became an instant (albeit entirely unofficial) therapy pet (to me) the moment we brought her home last year, I can attest on my own small scale to how profound an impact animals can have on humans who are hurting or in need of something that the human world just can't give them. Thank goodness for therapy dogs like you who are able to provide companionship for so many in need of a fuzzy ear to listen :)

Wishing you all a deeply wonderful weekend,
♥ Jessica

I can't seem to follow you on here. Your follower widget is showing up blank yesterday and today. I'll keep checking in until it works!

I can't seem to follow you on here. Your follower widget is showing up blank? Probably just a glitch that will fix itself. I'll keep checking.

Oh Sitka, what wonderful things you and Nanuq have done by letting God use you to reach these very ill and unhappy people. I'm sure it is because they know that you do not have any preconceived ideas or prejudices. You, like God, love everybody where they are and no matter what their problems.

We will pray that you will continue to bring God into these people's lives through your love and visits.

OH Andrea (:) that is such a wonderful story ..I am so glad you can help others with your darling dogs(:) Thanks for all you do.. warm hugs..Patty

Andrea, I'm rejoicing with you!!! What an amazing testimony! Yes, truly you have witnessed two miracles!

Thank you so much for sharing your experiences.

Have a wonderful weekend!

Praise the Lord for this miracle!

Wow....God Bless you and your miracle! What an inspiring story!

Thank you for sharing this, Andrea. I love your dogs. They are beautiful. What an awesome gift you are sharing with others. God Bless!

Wow! Those were miracles, Nanuq, Sitka and Andrea. I'll definitely be coming back to read older posts tomorrow. Hugs...

Ah this is so beautiful! How amazing!